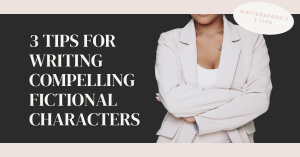 Listen while you read!

Make sure the POV character has a clear internal and/or external goal, depending on the scene; something needs to be stopping her from achieving said goal.

Ex: Ivy likes Olaya. She sees her as an aunt figure, which she needs. Because of this, she wants to act, but fear or lack of confidence or some other reason stops her from getting involved.

In this scenario, Ivy is a passive participant in the investigation. She is not acting based on a goal (see Tip 1).

Ivy happens to go to the library where she finds a book on a table. She flips through it, for no apparent reason, and finds a clue.

In this scenarios, Ivy responds to a Stimulus-Response-Result situation. She has a goal and seeks to achieve it (finding the book, and therefore the clue).

STIMULUS: Ivy overhears something about a book at the library. She thinks it might be a clue.

RESPONSE: She makes the decision to go to the library to hunt for the book.

RESULT: She finds the book, which contains a message is written on a dog-eared page.

Choice and conflict. Instead of turning away from conflict, make sure your POV character faces it head-on. This comes down to decision-making. When faced with pursuing a clue or not, an active character will go in pursuit. That is far more interesting that a character who chooses not to act.