A Compelling Hero from A Knight’s Tale

Heath Ledger is a Compelling Hero from 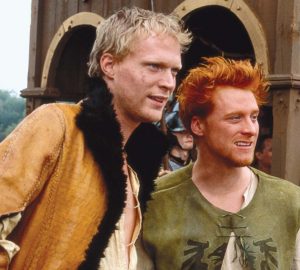 His path follows the Hero’s Journey. Not only that, the movie is a pure delight to watch. It’s fun and poignant. Heath Ledger is great, Paul Bettany as C

haucer is brilliant, and Rufus Sewell is such a great scoundrel.

Will is a peasant squire. The opening scene, his master has just died.

Will Thatcher wants to better his station in the world. His Call to Adventure is initiated by him.

Despite Will’s desire to change his stars, he can’t realistically do this because you are born into nobility…and he was not. This is the refusal, thrust upon him by circumstances.

Will Thatcher meets Geoffrey Chaucer, played by Paul Bettany. Chaucer gives Will vital information and guides him in his ruse.

Will literally crosses the threshold into the new world when he is accepted into the first jousting competition. Before that, he’s just trying on his new identity. It is when Chaucer (who is also an ally) helps him with his papers that he ‘becomes’ this new person.

Will competes against a prince, allowing the prince to lose with honor. This is a test of Will’s character.

For Will Thatcher, the Central Ordeal comes when he’s visiting his father, already a success for all his wins at jousting. Count Adhemar overhears the truth about who Will is. Will is then imprisoned and it appears as if he has lost all. He is in the blockade, on death’s door. But the prince, who he previously helped, frees him and knights him. This is his rebirth.

Will survived the blockade. He is knighted, which is what he wanted all along. There is a sense of completion with the journey Will has been on.

But Count Adhemar challenges Will to a jousting match.

Will Thatcher faces Count Adhemar in the final jousting match, but he’s a knight now, and more than prepared to win the battle, which he does

Will’s hero’s journey is complete when he remains honorable after winning against the dastardly Count Adhemar. And then he wins the love of Kate.

Comments: A Knight’s Tale has a very clear Hero’s Journey. Will Thatcher starts as a peasant and ends as a knight. He changes his stars, which is what his father told him he could do. His successful transformation is poignant because of the connect to his father.

Back to the Hero’s Journey Database