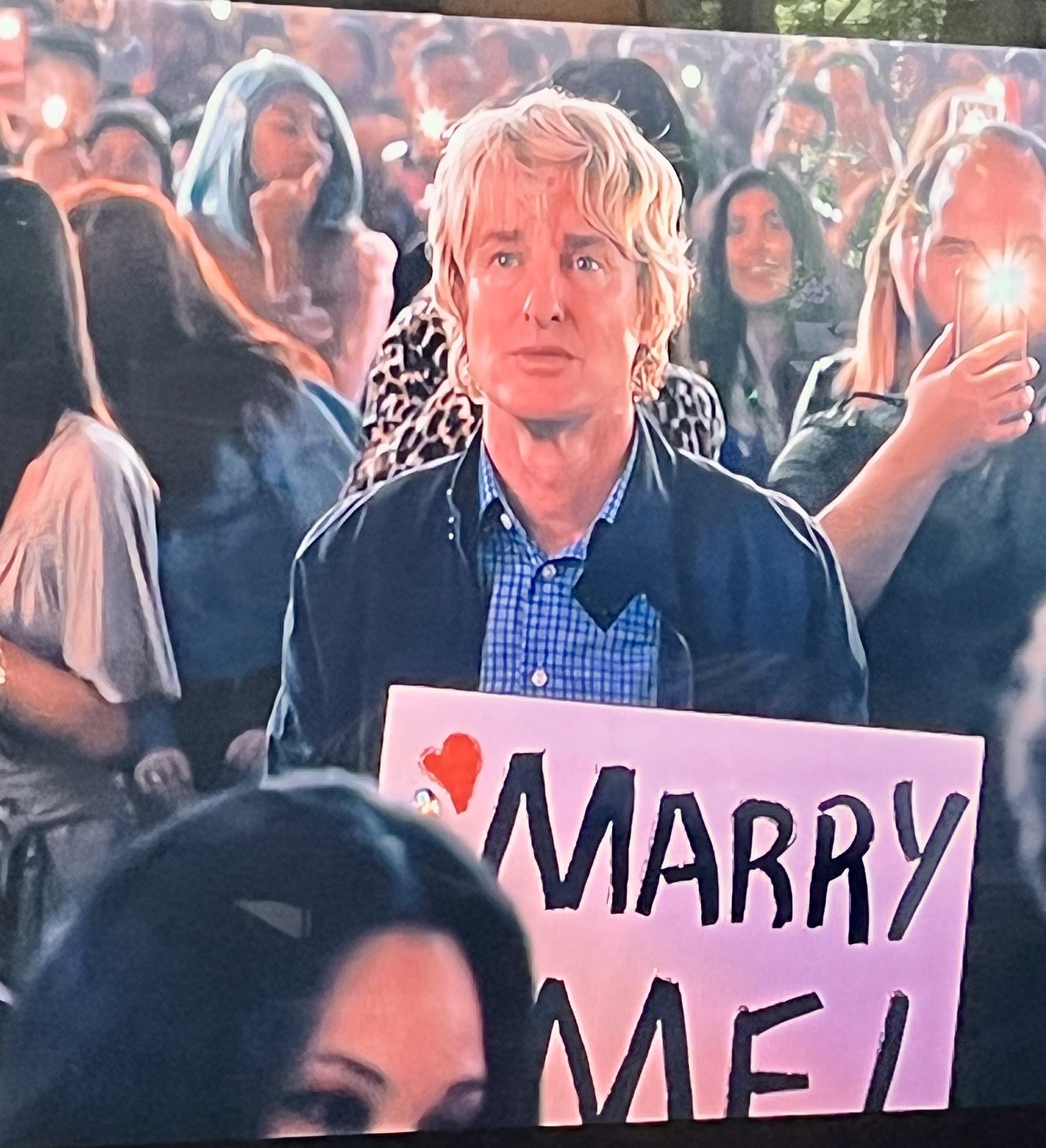 Charlie, Marry Me (Owen Wilson, with Jennifer Lopez and Meluma)

Summary (from IMBD): Music superstars Kat Valdez and Bastian are getting married before a global audience of fans. But when Kat learns, seconds before her vows, that Bastian has been unfaithful, she instead decides to marry Charlie, a stranger in the crowd.

Hero– Charlie Gilbert, an school teacher and head of the mathalon (math club and competition)

Ordinary World— Charlie is a divorced dad trying to connect with his daughter, Lou, who thinks her stepdad is awesome. To get out of his funk, friend and coworker, Parker (Sarah Silverman), invites him to go to the Kat Valdez concert with her. Charlie does not want to go. He says he has Lou that night. Parker convinces him to go with the line: “Maybe she’ll think you’re fun.” Call to Adventure–  Charlie goes to the concert. He ends up holding a sign that says “Marry Me”. Unbeknownst to him, Kat has just found out that Bastian cheated on her. She talks about losing faith in love, and says that if you want something different, you have to do something different. She sees Charlie holding the sign and in an impulsive moment, she says she will marry him. She says, “Why not?”

Meeting the Mentor–  Once again, Parker steps in. She, along with Lou, push Charlie toward the stage.

Crossing the Threshold– (18:00) Charlie hesitates, finally saying: “Okay.” They are married and kiss.

Central Ordeal– Kat goes to the Mathalon practice and tells a story about how she dealt with stage fright. The kids use dance steps to manage their anxiety. But Meluma shows up and announced that Marry Me has been nominated for a Grammy.

Reward– Kat has her Grammy nomination. He fears that he will lose her, but she still wants him, too.

Road Back– After the Grammy performance, Charlie lets Kat go to live in her celebrity world. He realizes that he doesn’t fit in, no matter how much he wants to. Their romance is over. (1:25)

Resurrection– Charlies is distraught. Kat is everywhere he looks (in store windows, on cab signage…). From the media, it seems Kat and Bastian are back together. He refuses the money Colin offers him to keep the prenup in place.

All he can do is protect himself. He goes forward with the mathalon. Still looking out for Kat, he asks Colin to be there for Kat when she figures things out, because “she’s going to need someone.”

At the mathalon, the opposing team’s coach tries to psyche the team out. Lou gets stage fright. Charlie uses Kat’s dance steps to get Lou through it, but not in time to win. Charlie helps Lou through it. He tells her how proud of her he is.

She then holds up a sign that says: Marry Me…and another that says: Again. She mouths: “I love you.”

Charlie comes to her. (1:44) They’ve come full circle to the Call to Adventure moment. Return w/ elixir– Various clips show Kat in Charlie’s world (at school, dancing with his students) and Charlie in Kat’s world (rehearsals). The final scene is of Charlie, Kat, Lou, and the dog together as a family unit in their own world.  (1:45)

Comments: This is a cute romcom. Both Kat and Charlie have a “fish out of water” hero’s journey.

The movie is one hour, 45 minutes (105 minutes). The crossing of the threshold happens at 18 minutes in, just under 1/4 of the way through.

Act II comprises the bulk of the movie.

The Resurrection (Act III), when Kat uses her newfound independence and knowledge of what she really wants, takes place at 1:35. This is the last 10 minutes of the movie.