Jonah Byrde is not your typical hero, but he is a compelling one.

Summary (from Netflix): The Byrdes and their teenage kids, Charlotte and Jonah, are, for all intents and purposes, an ordinary family with ordinary lives. Except for the job of Marty, a Chicago financial advisor who also serves as the top money launderer for the second largest drug cartel in Mexico. When things go awry, Marty must uproot his family from the skyscrapers of Chicago and relocate to the lazy lake region of the Missouri Ozarks. 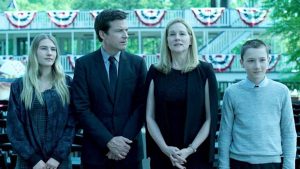 Jonah is approximately 11 years old in season one. He’s an ordinary kid living with his parents and sister, Charlotte, in Chicago.

Jonah’s parents tell the kids they will be moving to the Ozarks. This is the first hint to Jonah that his life may be changing.

Jonah (and Charlotte) do not want to go.

Buddy Dieker owns the house the Byrdes live in the basement of the house Marty and Wendy buy. He becomes a friend to Jonah. He teaches Jonah how to handle guns and how to hunt, which comes in handy later in the series.

Jonah accepts his new life in the Ozark. 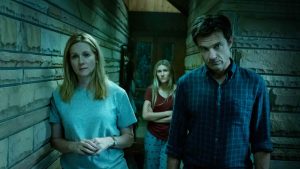 Jonah’s involvement in his parents’ new world escalates when he begins to doubt his parents and their intentions. He begins working with Ruth Langmore (and indirect with Darlene Snell) laundering money

Marty is a bit proud of Jonah’s intelligence and entrepreneur nature. Jonah’s successful in his laundering. He works out of a room at the Lazy O motel, which Ruth now owns. At 15, he’s a successful money launderer

Wendy’s father comes to town to search for Ben. He wants to take Jonah and Charlotte with him back to North Carolina. Jonah will be able to leave behind the criminal life.

However, Ruth helps reveal that Nathan Davis (played by Richard Thomas) is not a man his grandkids think he is. He’s a misogynistic, abusive man. The kids do not go with him.

Jonah begins a tenuous reconciliation with his mother.

As Marty and Wendy make final preparations to extricate themselves from the Navarro cartel, there is a big fundraiser on the Missouri Belle, the floating casino his parents set up. Jonah is glad to be part of the event.

Unbeknownst to Charlotte and Jonah, Marty and Wendy’s plans backfired. They manage to get through the night. Back at home, however, Mel Sattem  is waiting for Marty and Wendy with Ben’s remains (which Ruth had in a goat cookie jar and which Ruth gave to Jonah).

All could be lost for the Byrde family, which has only just begun to come together again.

The sound of a rifle cocks. The camera turns to Jonah, who points the rifle at Sattem.

Marty gives a slight smile and a slight nod.

Return w/ elixir– The screen goes black, but the sound of a gunshot is heard. Jonah acts to protect the family he realizes he needs and loves. In this moment, he’s put to use his shooting, which Buddy taught him, in a sense coming full circle to the beginning of his journey in the new world.

Comments: Ozark is a four season TV show. Jonah is a great example of every character being the hero of their own journey. He begins as an innocent and naive kid who becomes a force to be reckoned with in the world of money laundering and the criminal life his parents created. He ends up being their protector in the end.

Check out other Hero’s Journeys!