The original Top Gun has a clear Hero’s Journey. 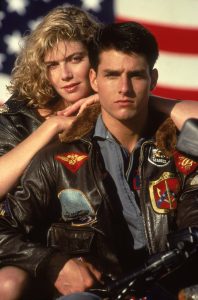 Maverick is a gifted Navy fighter pilot who doesn’t follow the rules. Goose is his RIO. During a flight, they encounter two MiG-28s. Cougar, the pilot in another place, freezes. Maverick performs a risky inverted maneuver to help Cougar.

They are all low on fuel. Maverick is just about to land safely on the carrier when he breaks protocol and directly disobeys orders in order to help Cougar and his RIO land.

Maverick and Cougar are the two top pilots. There is a chance to go to compete for Top Gun, which is the best of the best.

This comes in the form of TJ Cassidy not wanting Maverick to be the one to go to Top Gun. He thinks Maverick is too much of a liability.

Goose acts as mentor at this point. He supports Maverick, but is also his conscience. The commander (TJ Cassidy, as himself) cautions Maverick about his dangerous behavior.

Cougar ends up quitting. He has ‘lost his edge’ and turns in his wings. Cassidy, against his better judgement, selects Maverick and Goose to go to Top Gun. Maverick literally crosses the threshold when he drives his motorcycle onto the flight academy land.

Maverick and Goose are doing tactical maneuvers. It’s a big fight scene in the sky. It looks like they will succeed until they intercept ‘jet wash’, which sends their plane into a spin. They eject. Goose dies.

Maverick goes back into flight with a different RIO. In the midst of the training, he freezes. He, like Cougar, has lost his edge.

Later, Charlie tries to get through to Maverick, who blames himself for Goose’s death, but he is lost. He has his demons…namely that he is like his father, who was also a maverick and was considered dangerous.

Maverick is cleared of any fault in Goose’s death. After Charlie fails to get through to Maverick, Maverick goes to Viper’s home. Viper (Mike) reveals the truth (classified information) about Maverick’s father—that he saved many people in the battle that ultimately took his life. Maverick’s father was a hero.

Mike, as mentor, guides Maverick. He tells him he has two options: Get back up in the air or quit. He says he has enough points to graduate with his Top Gun classmates.

Maverick shows up after the graduation (Iceman won Top Gun) and is given an assignment. Iceman expresses his doubt that Maverick is up to the task. Maverick is still doubting himself.

The mission ends up far more intense than initially thought. There are 6 MiGs. One plane goes down. Iceman is in trouble. It’s up to Maverick, who is still doubting himself. He finally snaps out of it after a close in on Goose’s dog tags. He ‘speaks’ to Goose. After that he engages in the fight. He ends up saving Iceman and Slider with his courage and fearlessness.

Maverick is in top form. He tells TJ Cassidy that he might want to be an instructor at Top Gun.

He has closure with Goose when he throws Goose’s dog tags into the Pacific.

And Charlie comes back to Maverick, coming full circle to their first meeting when she plays You’ve Lost that Loving Feeling on the juke box.

Comments: Top Gun’s hero’s journey follows Maverick as he deals with the  burden of his father’s reputation and his own dangerous behaviors. His resurrection is a powerful moment in his journey.

Back to the Hero’s Journey Database