What is Maverick’s Hero’s Journey, from Top Gun? 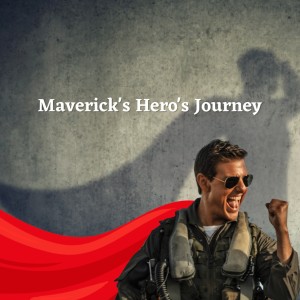 What is Maverick’s Hero’s Journey, from Top Gun, you ask?

Let me tell you. It’s fun to revisit a hero in a sequel. This time around, our Hero’s Journey is about Pete “Maverick” Mitchell, the hero from Top Gun and Top Gun: Maverick.

Maverick has a clear Hero’s Journey in both installments. It’s easy to think that the completion of the mission is the climax, or resurrection, in this film, but read the WriterSpark breakdown of The Hero’s Journey.

When you’re done here, check out the Hero’s Journey Database!

Maverick is part of a program that is going to be shut down because the plane they’re testing didn’t mock 10. Radm. Chester ‘Hammer’ Cain (Ed Harris) arrives to find Maverick in the sky pushing the plane to Mock 10… then Mock 10.1, then 10.2. 10.3. He ejects when the plane tears apart.

Maverick is a distinguished pilot, but has remained captain because he is where he belongs. The Navy sees him as a liability and dangerous. He lives up to his name of Maverick.

Hammer tells Maverick his career is basically over and he’s being sent to Top Gun.

This manifests in Maverick’s expression. He doesn’t want to go back to Top Gun. But he has no choice.

Iceman (Adm. Tom ‘Iceman’ Kazansky). Maverick’s old nemesis is an admiral now and has intervened to protect Pete. He is the one that requested Maverick go to Top Gun. He has been behind the scenes in Maverick’s life, saving Pete from himself.

Maverick rides his motorcycle into the Flighttown and Top Gun.

Maverick finds Rooster. They sacrificed for  each other. Their relationship is somewhat mended. Maverick says, “What were you thinking?!” and Rooster replies, “You told me not to think!”

They steal an enemy F15. This harkens back to Top Gun 1 and the planes Maverick and Goose flew. Rooster helps get everything ready to go, then they escape. The runways were destroyed by Tomahawks (US) to slow the enemy down.

Maverick manages to get the plane in the air. They think they’re home free.

They start back toward base. Rooster gets the old equipment working. But then enemy planes appear.

Another dogfight. They fight back with the few missiles and guns, which don’t compare to the weaponry of the new planes. They also can’t outrun them. But this is the plane Maverick learned in. He maneuvers and defeats all the planes. UNTIL one appears at their nose suddenly, coming straight at them.

They are doomed. Until Hangman, who was Rooster’s nemesis in the way Iceman was Maverick’s, appears. He shoots the enemy plane in the nick of time. They all survive.

Maverick and Rooster’s relationship is healed. As Iceman wanted, Maverick has let go of the past (as has Rooster).

Maverick and Penny ride off into the sunset on the motorcycle.

This second installment does not disappoint. There are so many turning points and, once again, the story follows a solid Hero’s Journey.