Marry Me is a light romantic comedy of the first order, and Kat Valdez has a clear Hero’s Journey.

Summary (from IMBD): Music superstars Kat Valdez and Bastian are getting married before a global audience of fans. But when Kat learns, seconds before her vows, that Bastian has been unfaithful, she instead decides to marry Charlie, a stranger in the crowd.

Kat is set to marry Bastian in front of their legion of fans, but she’s not sure about it. In some ways, se feels she has lost herself. But the wedding plans are set and the concert where 20 million people will watch her sing Marry Me to Bastian, and they take their vows, is set.

(15:00) Kat sees people backstage looking at their phones. She knows something is up. She demands Colin give her his phone learns Bastian betrayed her.

Kat is stunned. She doesn’t know what to do. She stops the concert and talks about love. She proclaims love to be a lie. Not real. She won’t get married. 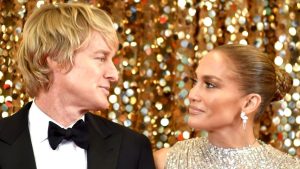 (18:00) Kat takes a leap of faith. She says that “if you want something different, you have to do something different.” She sees a man in the audience holding up a sign that says Marry Me. She makes a different choice. She calls him up on stage and she does get married…to Charlie. She says: “I do.” They are married and kiss.

Kat goes to the Mathalon practice and tells a story about how she dealt with stage fright. The kids use dance steps to manage their anxiety. But Maluma shows up and announced that Marry Me has been nominated for a Grammy.

Kat still wants Charlie, but she also wants the Grammy and the reward for the song and her career.

Charlie tells Kat that he can’t be with her. He doesn’t fit into her world. He’s a fish out of water. Their romance is over. (1:25) 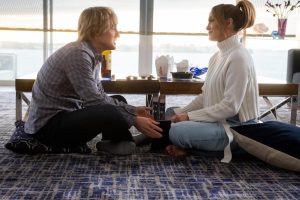 Kat writes a song about her love for Charlie (On My Way). It hits #1. She is self-sufficient. She views the first kiss on stage with Charlie.

When on Jimmy Fallon, he says she wrote On My Way was written for Bastian. This is a wake up call for her. She leaves mid-interview. “It’s an inopportune time to have an epiphany, but I don’t want to go back. Someone told me that if you sit in the question long enough, the answer finds you.”

She uses her new-found independence to make her way to Peoria to find Charlie (1:35). Colin helps her, though. She goes in search of her answer.

Kat walks in to find Lou on stage, frozen, and Charlie using her dance steps to get Lou through it (1:42). She tells Lou she was amazing. She took a shot, even though it was scary (1:43). She says, “Not everything adds up the way you think it will…If you want something different, you have to do something different.” She is talking to Charlie, too. He says, “What if we’re just too different?” She says, “What if we’re not?”

She then holds up a sign that says: Marry Me…and another that says: Again. She mouths: “I love you.”

Charlie comes to her (1:44). They’ve come full circle to the Call to Adventure moment.

Return w/ elixir– Various clips show Kat in Charlie’s world (at school, dancing with his students) and Charlie in Kat’s world (rehearsals). The final scene is of Charlie, Kat, Lou, and the dog together as a family unit in their own world (1:45).

Comments: This is a cute romcom. Both Kat and Charlie have a “fish out of water” hero’s journey.

The movie is one hour, 45 minutes (105 minutes). The crossing of the threshold happens at 18 minutes in, just under 1/4 of the way through.

Act II comprises the bulk of the movie.

The Resurrection (Act III), when Kat uses her newfound independence and knowledge of what she really wants, takes place at 1:35. This is the last 10 minutes of the movie.