writerspark Posted on June 26, 2022 Posted in Blog, Writing Tips No Comments Tagged with Point of View 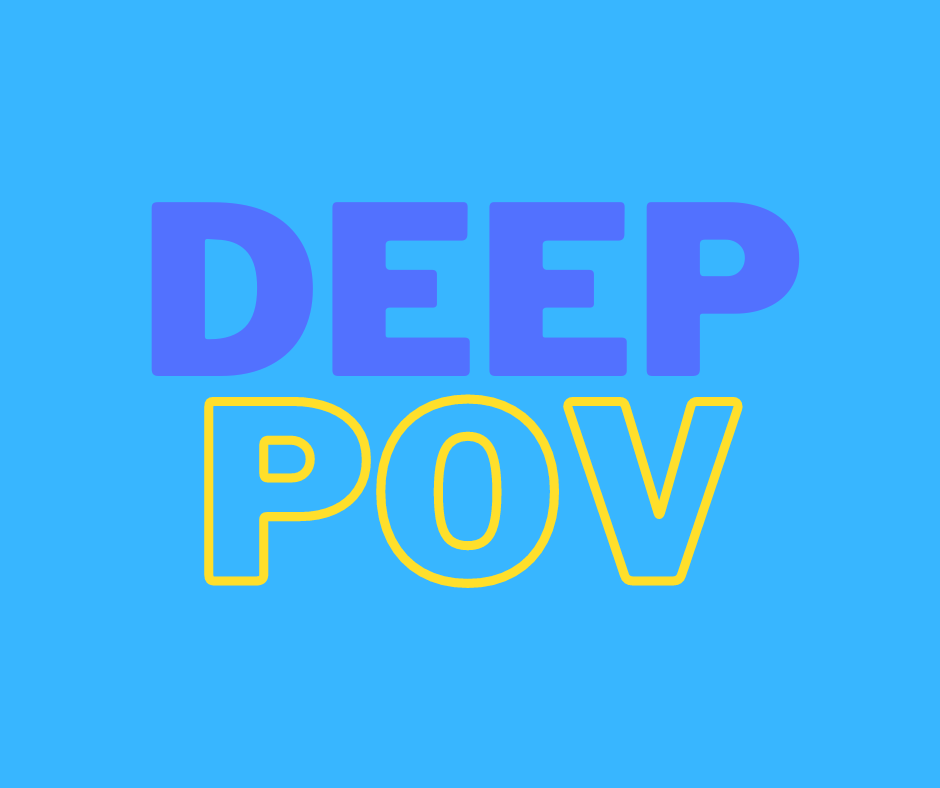 Deep POV is a technique that moves the reader so far into a character’s head that they are completely engrossed. It is the surest means to grab your reader’s attention… and keep it.

It’s also sometimes called Limited 3rd, meaning you are in only one person’s head through an entire scene, and the reader sees everything through that lens. There are 4 steps needed when establishing Deep Point of View.

First, let’s take a broad stroke look. When an author writes in Deep POV, they are showing, not telling.

The author uses all the sensory details (what the character is seeing, tasting, etc), but more than that, it goes into the POV character’s mind, showing how he/she FEELS and WHAT he/she THINKs.

It also helps develop voice because Deep POV avoids AUTHOR INTRUSION at all cost! This means there are no:

• He thought, she thought, I thought, I could see, he felt, etc. The narrative goes STRAIGHT TO THE thought or sight or feeling.

It’s the difference between saying:

What the devil is the guy doing, he thought to himself.

What the devil was the guy doing?

Which one has us right there in the character’s mind?

Hopefully you said the second example!

In order to really understand Deep POV we first need to take a look at Scene Structure.

Scene structure builds on a character’s GOAL, MOTIVATION, CONFLICT, and ends with DISASTER. This can be simplified by saying a scene is made up of STIMULUSES and RESPONSES. One thing happens which then facilitates a response or reaction:

If the phone rings, someone needs to answer it (or at least acknowledge it).

If the doorbell rings, someone needs to answer the door.

BUT, you can’t have a scene with just Stimulus and Response because it would fall flat. Without the action and character’s thoughts, we have no context for the scene. We don’t know what people are doing, feeling, thinking. This is when we start to go DEEP. Here is the progression of the same scene using the 4 Steps of Establishing Deep POV:

• Thinks what am I going to do with this sword? (THOUGHT)

It would work far better in this order:

• Sees sword and thinks what am I going to do with a sword? (THOUGHT)

Put into narrative, it would read something like this:

He heard footsteps marching down the hall (STIMULUS). His stomach clenched (EMOTION). The sword lay on the table, the blade gleaming, beckoning to him. What was he supposed to do with that? (THOUGHT) He’d never had training. The footsteps stopped outside the door and he grabbed the damn weapon, (DECISION) readying himself for whatever he was about to face (ACTION).(RESPONSE)

Deep POV is Your Friend

It doesn’t always have to be in this order, and you don’t have to use all of them all the time. Also, keep in mind that there is always a time for tags and moments of telling.

But Deep POV is your friend. Basically, eliminate telling by using these elements in a scene. Using them all and eliminating internal tags (like he thought or she considered) will help you go deep.

Here is another example in various stages, leading up to Deep POV:

Margie heard the chiming of the door bell. (STIMULUS) Racing to the door, she unhooked the latch and pulled the door open. (RESPONSE) “Hi, Bob. What are you doing today?” she asked. (STIMULUS)

“Oh, sure.” She turned back toward her kitchen. (RESPONSE)

They create distance between the narrative and the reader. They prevent DEEP POV.

Margie heard the chiming of the door bell. (STIMULUS) Not two seconds before, she’d seen Bob leave his house with a small cup in his hands. (THOUGHT) It was probably her neighbor. (DECISION) Racing to the door, she unhooked the latch and pulled the door open. (RESPONSE)

“Hi, Bob. What are you doing today?” she asked. (STIMULUS)

At least he wanted something sweet from her. (THOUGHT) “Oh, sure.” She turned back toward her kitchen. (RESPONSE)

This is a much better passage. It includes THOUGHTS and DECISIONS.

Margie heard the chiming of the door bell. (STIMULUS) Not two seconds before, she’d seen Bob leave his house with a small cup in his hands. (THOUGHT) Her breath caught. (EMOTION) Could it be her hunky neighbor? (DECISION) Racing to the door, she unhooked the latch and pulled the door open. (RESPONSE) “Hi, Bob. What are you doing today?” she asked. (STIMULUS)

Deflated, her shoulders sank. (EMOTION) At least he wanted something sweet from her. (THOUGHT)

“Oh, sure.” She turned back toward her kitchen. (RESPONSE)

This passage is much stronger. The key is SHOWING the emotion.

Finally, let’s move to the FINAL STEP TO DEEP POV where we REMOVE EVERYTHING TELLING.

The doorbell chimed and Margie spilled the coffee she was pouring. Not two seconds before, she’d seen Bob leave his house with a small cup in his hands. Her breath caught. Could it be her hunky neighbor?

She set the coffee pot back on the burner so fast the dark liquid sloshed over the side. Hell’s bells. She ran her hands over her rumpled pajamas, tightened her ponytail and raced to the door. Unhooking the latch, she prayed he thought the tousled look was sexy.

“Hi, Bob,” she rushed, her voice a little winded from the Olympian vault to the front door.

She really needed to say no to the Oreo gods more often. “What’s up?”

“Nothing special.” He flashed a sheepish grin, though her gaze didn’t linger on his face. No, as always, it traveled south. Jeans low on his hips, his signature black T-shirt, bare feet. Now that’s how you rock the tousled look. He really was too good-looking to be allowed to roam in the wild like this.

He motioned with his measuring cup, dipping his head a little to get her attention. “I wondered if you if you had a cup of sugar I could borrow?” His tone was warm but not flirty.

Deflated, her shoulders sank. He didn’t seem as enamored with her little Snoopy shorts and tee as she’d hoped. “Oh, sure, come on in.”

He followed her into the kitchen, and she couldn’t help adding a little extra swing with her hips.

By showing the THOUGHTS, EMOTIONS, STIMULUS, and RESPONSE, the scene comes alive. You can also see how much longer it is. Building in these 4 elements expands the scene.

Here is another example, this one from one of my Magical Dressmaking mysteries:

Her pudgy cheeks had gone ruddy and her hair seemed a little more wild than it had the night before. She looked like a kid in a candy store. “Come on,” she said. “You can tell me.(STIMULUS) The flowers around the body. When I started taking pictures, they were small. But by the time I was done…” She clicked an arrow on the laptop and another picture popped up. (ACTION) “By the time I was done,” she continued, “they looked like this.”

The laptop sat between us. She ran her index finger over the touch pad and tapped it with her fingers a few times. (ACTION) She brought her gaze up and spun the computer around to face me. Was that a smile tickling her lips? (THOUGHT)

My breath caught in my throat for an instant (EMOTION) and I lost track of what Madeline was saying. (EMOTION) My mother’s green thumb had gotten the better of her, and Madeline Brighton had caught the evidence on film. I thought I’d stopped her from making the weeds and flowers sprout, but I must have missed one. (THOUGHT)

“I’ve never seen anything like it,” she said, tapping the screen with the pad of her finger. (ACTION) “The rumors are true, aren’t they?”

I sat a little straighter in my chair. (ACTION) Rumors were never good. Ever. (EMOTION) “I don’t know what you mean.” (DECISION)

Notice that Deep POV eliminates the need to italicize the internal dialogue. It is implied.

Here is one more example:

TELLING with NO Deep POV:

Lori walked though the fairgrounds. She thought she could hear footsteps coming up behind her. It occurred to her the midway was deserted. She didn’t know where the people had gone.

Now here is the same passage expanded into Deep POV by SHOWING the scene:

Lori hurried through the fairgrounds. The tap-tap-tap of footsteps rung in her ears. Her imagination? She tripped over her high heels. Stupid to wear pumps to a fair. What had she been thinking? Panic pricked her skin. She should have listened to Ryan. He’d said it was a ruse. A scam. Who in their right mind would demand a meeting at a fairground? And where the hell had all the people gone? She picked up her pace. Turning around wasn’t an option. She looked this way. That way. Dodged behind the ringtoss game booth.

The first doesn’t go into Deep POV; the second one does, and it is so much more engaging.

Click here to read about 6 Tips for Writing Killer Scenes.

And check out this mini course on writing dialogue!